Folklore tastes best when experienced in the least expected places and on the least expected hours. Not in museum exhibitions or ticketed shows, but like right now – on a hot summer night on one of seven hills of Plovdiv, where I’m sitting among musicians coming from all over the world to learn the complicated Bulgarian music. Deep in my soul I am thankful for a random choice that directed me to Hikers Hostel – the place where I could live with musicians, hear them and play together.

Bulgarian music and well lit houses of the oldest city in Bulgaria don’t care that Lauren and Jorge are from the USA, Katie from UK and Fabrice came here from France. Or maybe they care a lot more when people outside from this culture are so fascinated by Bulgarian folklore art, that they devote long years to learn it’s complicated ways? Because for the inexperienced ear the changes of metrum and qurter tones are a genuine riddle, that has been born from the crosssover of European and Oriental cultures. 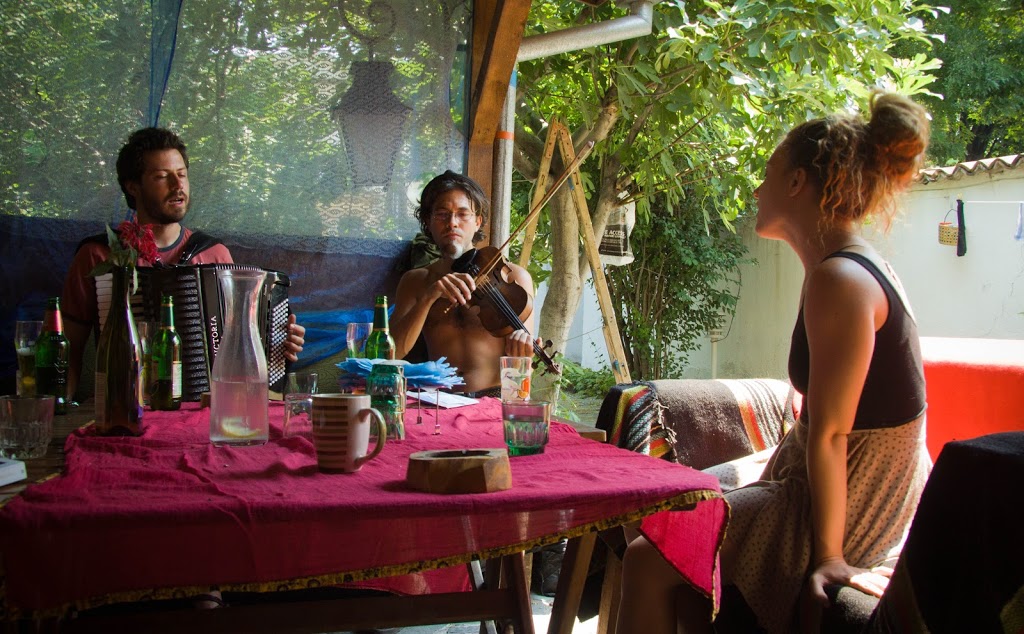 Plovdiv is the fourth oldest continuously inhabited city in Europe. Brought up in the Thracian culture, it has had several stormy romances with Greek, Roman, Bulgarian and Turkish culture. Material remnants of these relationships are present all over the city making it one of the most fascinating in the Balkans.

It is Thracians, to whom Plovdiv owes its location on the banks of Maritsa river and covering the surrounding seven hills: Nebet, Dzhambaz, Taksim, Markovo, Dzhendem, Bunardzhik i Sahat. Why do I write about them? They are important enough to be placed in the city’s coat of arms, and for the visitor they are a sort of guide through the history of the settlement, being chapters of it’s chronicles. 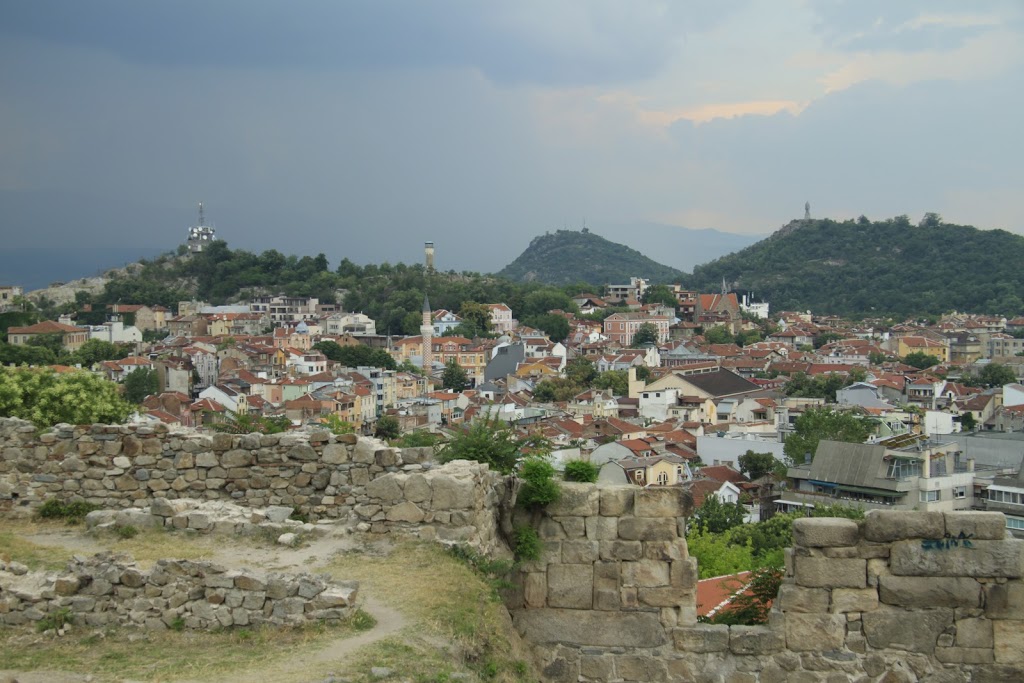 The photo above is a view from first of the hills, Nebet, where are placed the ruins of Tracian ancient city of Eurnolpias – the first incarnation of Plovdiv. Open for everyone in the day and night, it is a perfect viewpoint and a popular place for meetings and hangouts. In fact this is the hill, where in the middle of the night we could be caught playing music and drinking beer.

Between two other hills – Dzhambaz and Taksim – is placed one of the most known sights from the Roman times in Bulgaria, ancient theater. Impressive when seen in contrast with street going in a tunnel under it and Rodopi mountains in the background, and even more impressive when is full of people during a concert (for example last years DVD by Anathema) or annual International Folklore Festival taking place at the turn of July and August. Looking at it it’s hard to believe it was built for 7 thousand seats. 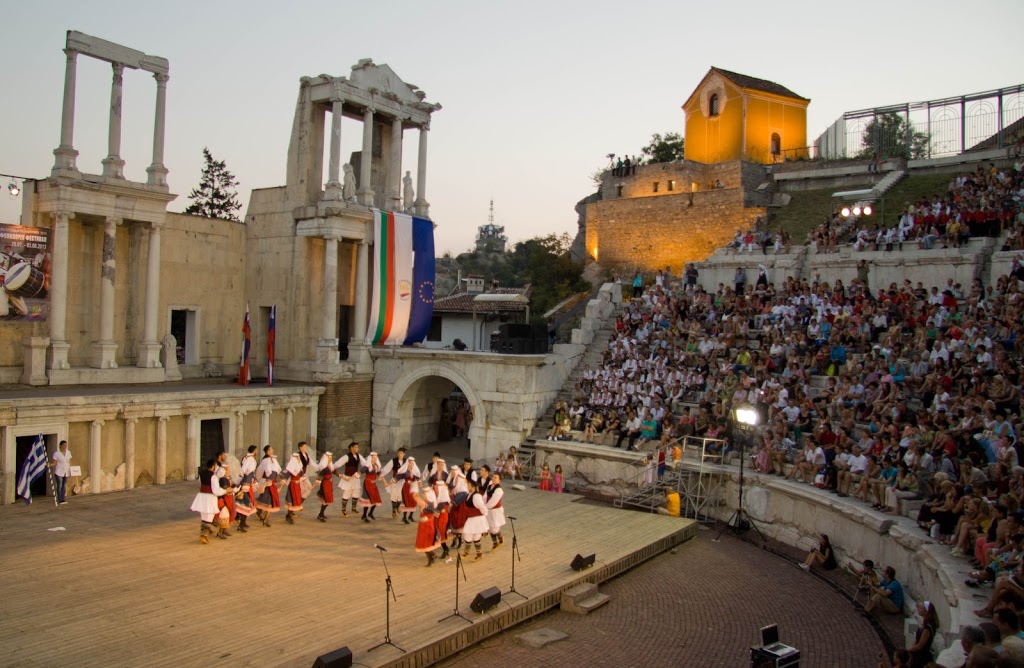 Two more important Roman sights are the Odeon and the Stadium. The first one is visible in the center and recently renovated, but the latter is definitely giving more food for the thoughts. The chariot track had length of one stadium – 600 meters, with places for 30 thousands spectators – that all lay beneath the main pedestrian street of Plovdiv, on which we just stepped… Only the fragment of one end with an entrance is visible – a piece of old glory astonishing, when you imagine the rest of the ancient ruins lying buried under street full of shops. 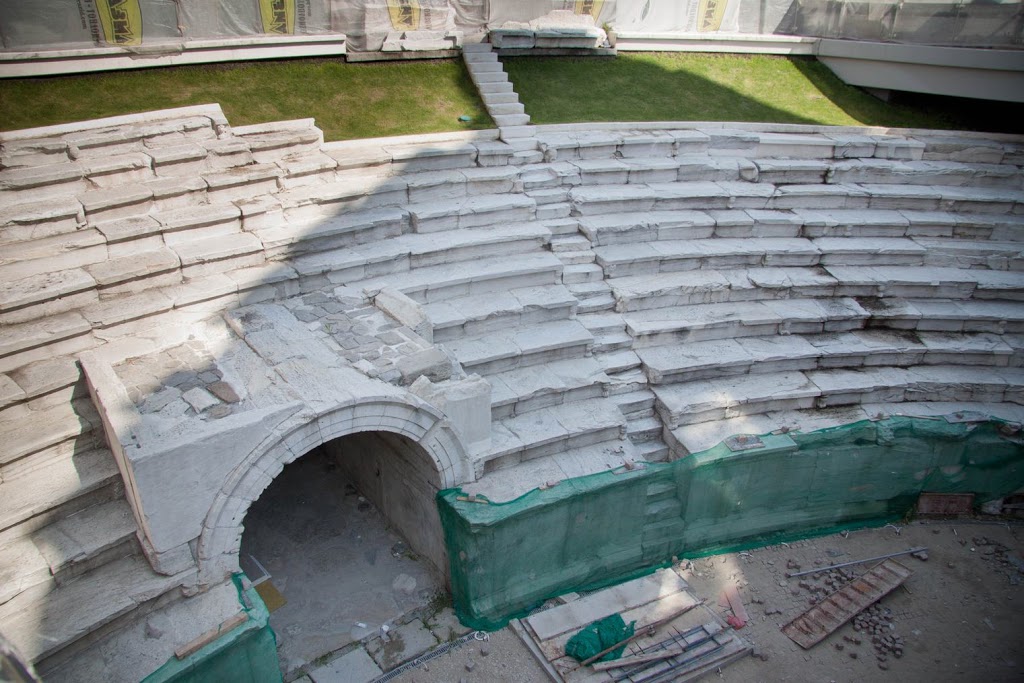 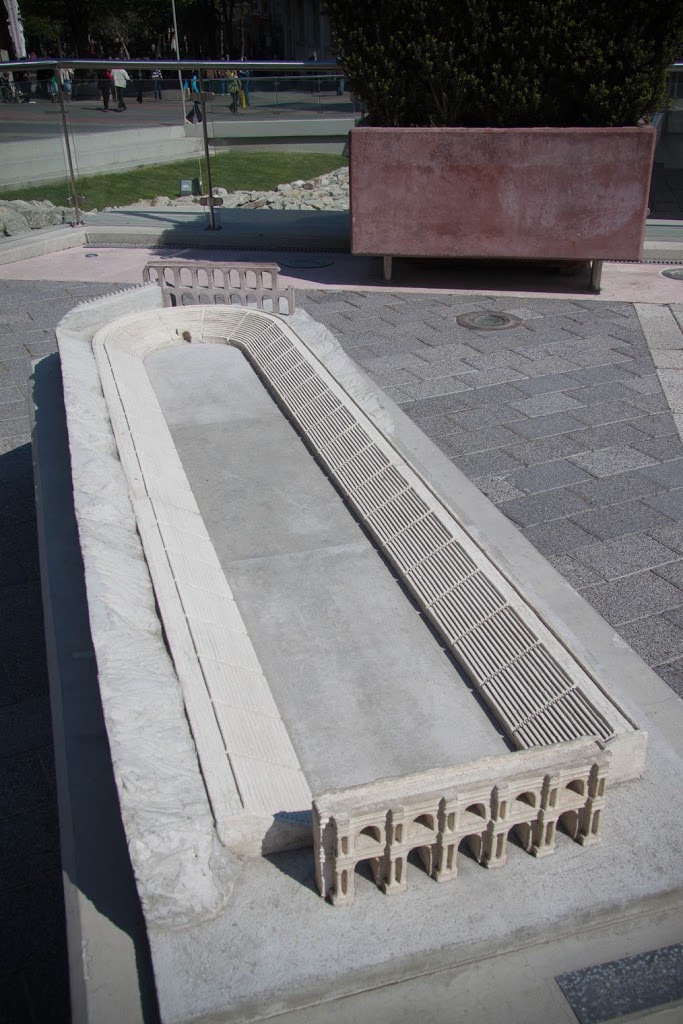 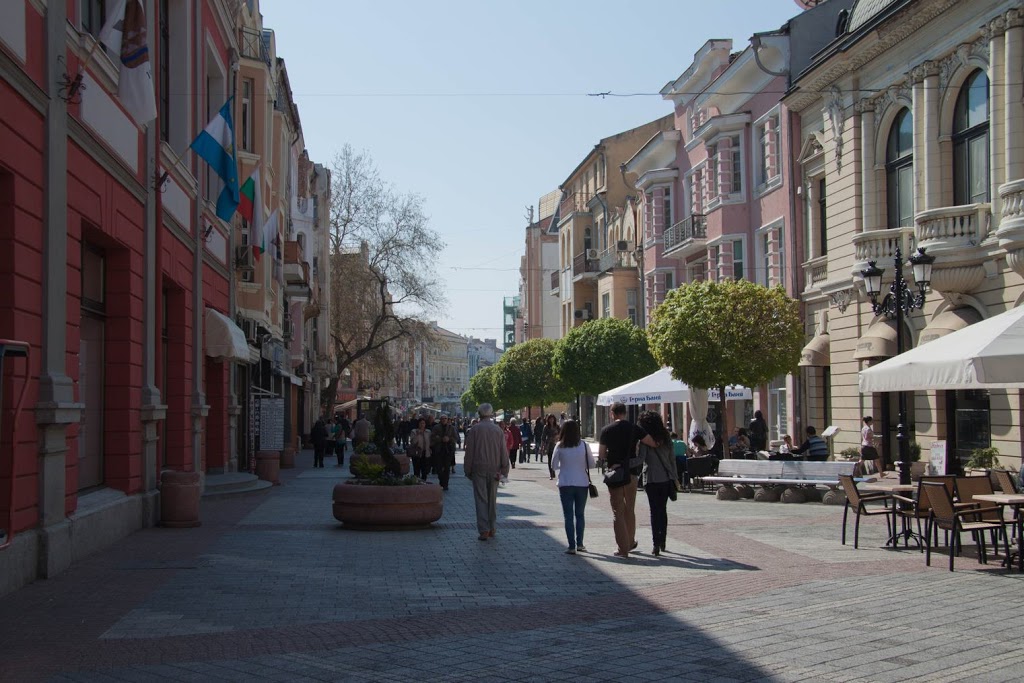 Above you can see the Knyaz Aleksandyr I-vi Street, placed several meters above the ancient Stadium.

The Roman building is accompanied by remnants of Turkish occupation, lasting for 500 years in Bulgaria – Dzhumaya mosque built right after conquer of Bulgaria in the 14th century. 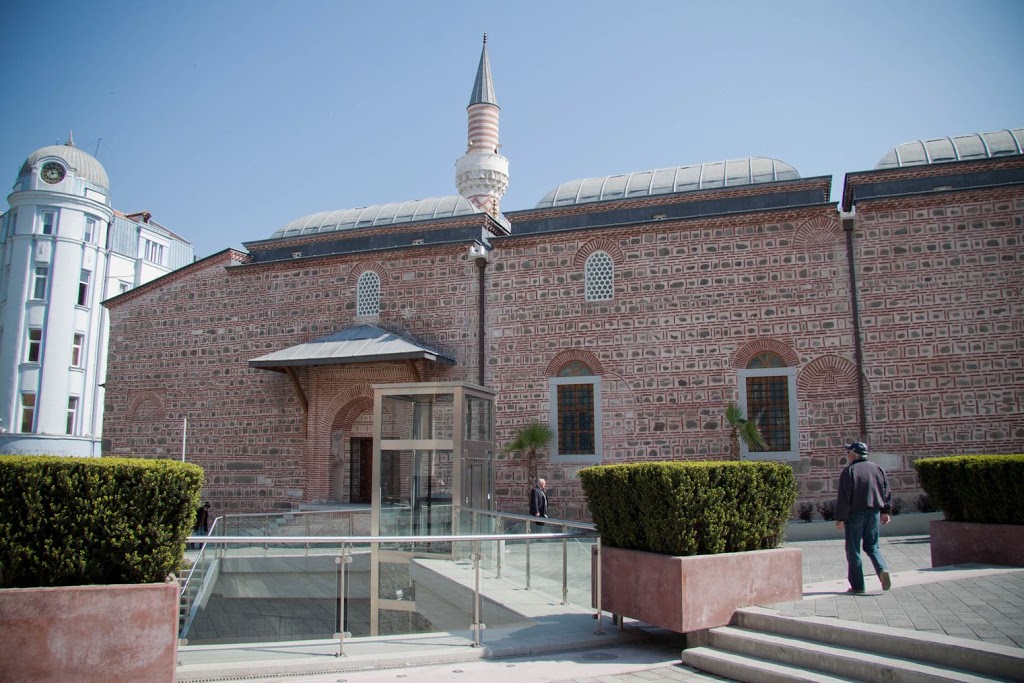 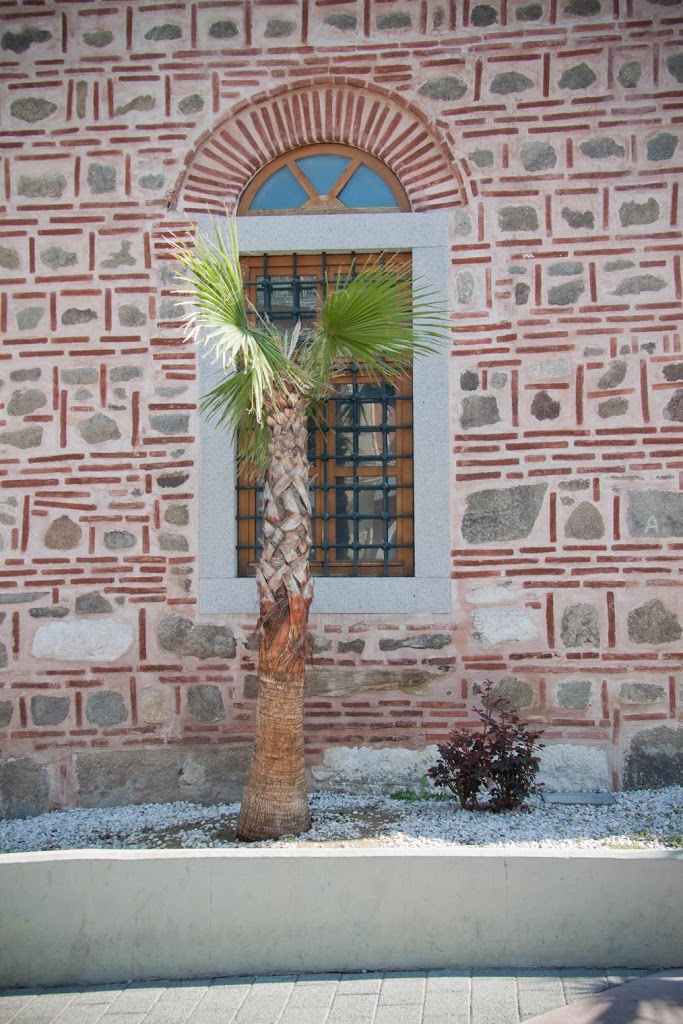 The highest hill of Plovdiv is Dzhendem, also known as The Hill of Spirits (Dzhin Tepe), here were found the oldest historical fragments of a settlement dating back to the Bronze Age. Later the Bronze Age remnants were replaced by a great bronze statue of Apollo and his temple.

The next hill, Sahat Tepe, bears a mark of 19-th century story of the city – a clocktower with a mechanism brought here from Vienna. A less known fact is, that coming down on the eastern side of Sahat there are amazing big-scale portraits on the rocky slopes of the hill. The guerilla graffiti is a delight for all street art (is it still street art if it’s on the rocks?) and history fans. 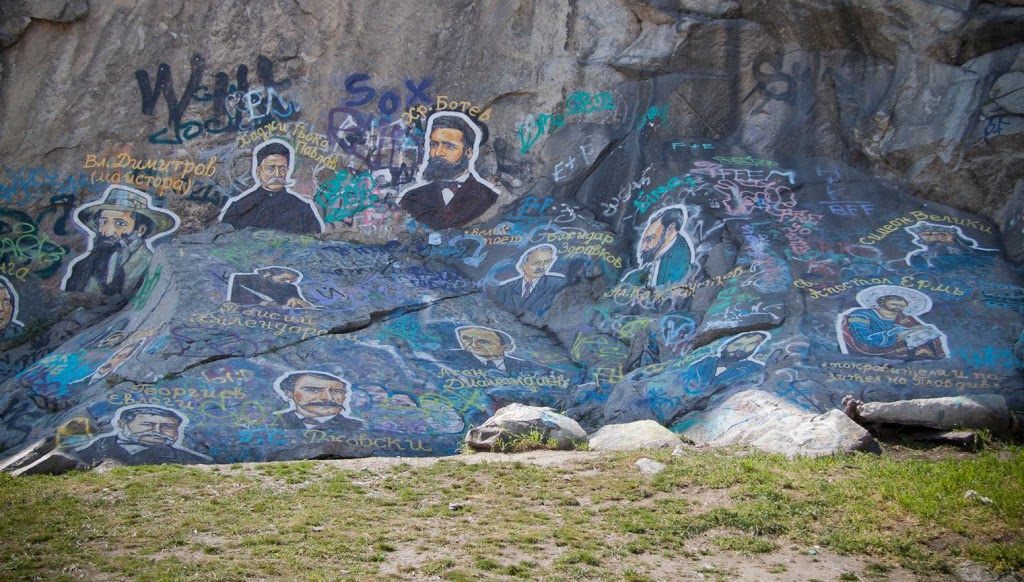 Bunardzhik, known also as the Hill of Liberators is a touch of the 20th century work. On the top you find an enormous, 15-meters high monument in memory of the Soviet soldiers that liberated Bulgaria during the Second World War. The soldier, commonly called Alyosha, stands proudly over the city, being caught in the second plan of most of the pictures taken from the ruined of the Thracian fortress on the Nebet hill. 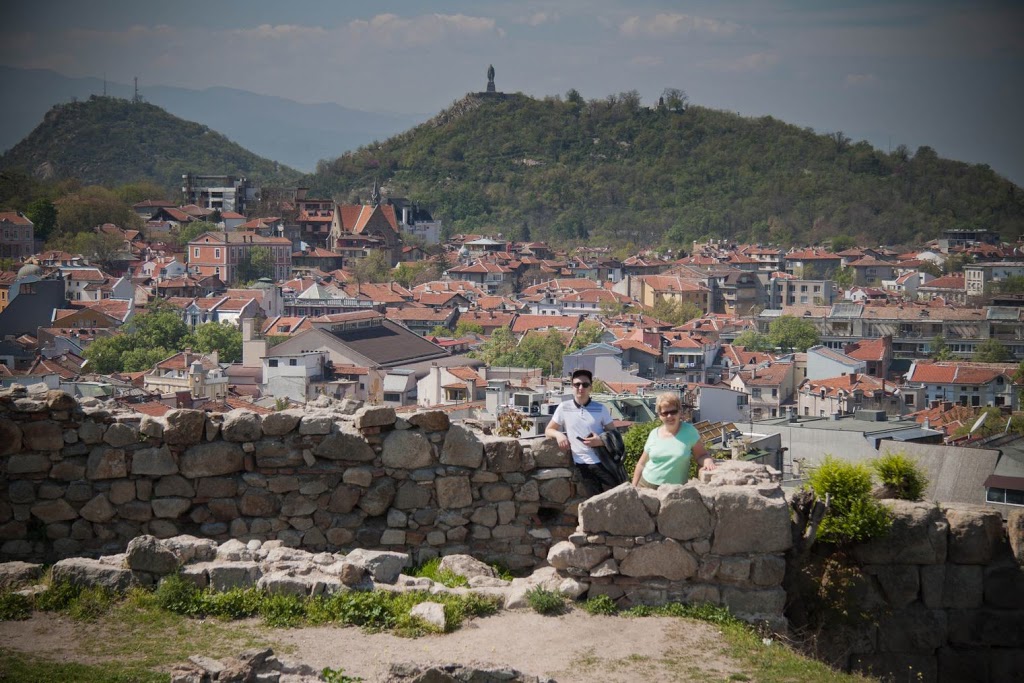 The trip of the seven hills of Plovdiv ends appropriately on the Markovo Tepe, but unfortunately the mountain is no more.It has been brought down at the beginning of the 20th centuryand is turned into a building site. The stones were used to pave the streets of the city and the land has been awaiting purpose for over a century and is still waiting for the grand opening of Markovo Tepe Mall.

Plovdiv’s coat of arms pictures the seven hills of which one – you’d think unmovable landmark – has fallen victim to “progress”. In contrast to the hill, the immaterial cultural heritage – music, dances, cuisine and traditions – are flourishing among the Bulgarians, as among artists from all over the world still fascinated by Bulgarian folklore.

Who is behind all this?

I'm Krzysiek (Kris) Filipiuk, guy that likes going from time to time to some place in world, make a few pictures and then write about it - here on Old Long Road.

Enjoy, and if you want to know a bit more about me check About Me section, obviously ;)

Facebook Pinterest
© Copyright 2015 by Krzysztof Filipiuk
We use cookies to ensure that we give you the best experience on our website. If you continue to use this site we will assume that you are happy with it.Ok